Fifty-six Pelicans and guests attended our annual banquet at Scott’s Seafood in Walnut Creek, and that doesn’t count Bjorn Stumer who did all the work of organizing and then had to be out of town. Many thanks go to Bjorn for arranging such an enjoyable evening.

This may the most we’ve had a dinner that didn’t include a large contingent of visiting referees, and it was a satisfying end to the never-ending rugby season.

This is an awards banquet. Miscellaneous awards were presented by David Williamson, Aruna Ranaweera recognized Paul Bretz for his long service to the National Panel of USA Rugby referees, and Pete Smith handed out the Pelican awards.

It was good to see Bruce and Tina Bernstein, with Bruce having had some recent unpleasantness at a San Francisco hospital but back looking dapper, if thinner.

Your writer visited sometime-attendee John Tyler in the hospital that afternoon, and John sent his regards to the flock.

After dinner, dessert and coffee, the usual pattern has been for folks to head for the doors. But this night, an hour went by and most of the attendees were still circulating, sharing stories and lives, getting to know each other’s non-rugby selves a bit better.

No small number lodged for the night in nearby hotels, adding to the air of lassitude about taking one’s leave.

We are very lucky to referee with such a society, in an area with so much good rugby, with the support of our friends and loved ones.

English referee Lee Johnson has recently moved to Sebastopol and will be joining the NCRRS, from the North Midlands society.

Lee worked games for us at Stanford and St. Mary’s a couple of seasons ago when he was visiting his in-laws, and now he’s moved across the pond.

Stephen Valerio reports from his trip to visit our good friends with the Eastern Rockies Society:

I had the pleasure of heading out to Colorado for the Tenth Annual Eastern Rockies Rugby Football Union (ERRFU) Rocky Mountain Challenge. The Rocky Mountain Challenge is one of five regional tournaments in the United States where USA Rugby evaluates emerging players for its Elite High Performance Development System. Teams competed in U19, U17 and girls brackets. Many thanks to Joe Zevin for turning his house into a rugby ref dorm with refs and referee coaches from Minnesota, Texas, KC and a stray Pelican.

The tournament was played over 2 days on 4 pitches at the immaculate sports complex in Aurora. The pitches were flawless, properly sized with no overhanging trees with proper lines. A little shade wouldn’t have been bad in the middle of the day but I wasn’t complaining.

I opened and closed with 2 girls matches. Unfortunately, both were rather lopsided affairs (APEX [CO] 55-Texas 0 and Colorado 54-Texas 7), though all the teams played the match in good spirit.

Saturday closed with a heated U19 match where Oklahoma and Wisconsin faced off. Each side picked up yellows in the first half, but a late yellow against Oklahoma gave Wisconsin the breathing space to pull away to 24-7. Many thanks to the AR support in this match.

Saturday night the referees gathered for a nice dinner in a local Irish pub which I enjoyed greatly since I don’t get to enjoy a good shepherd’s pie as much as when I lived outside of NY City.

My first match on Sunday was a great U17 match between Wisconsin (in their great cow-patterned jerseys. I’m still not sure if they are white or black). Texas took the match 17-13. The strategic awareness of both sides was great as both teams switched back and forth from powerful pick-and-gos to swinging it out to the backs. A good match to get in before the heat kicked up.

As were approaching the end of the day a microburst hit. Not a lot of rain, but 15 minutes of intense win took out most of the tents and posts. A bit of delay ensued while the posts were re-set and then I got to AR the final between So Cal and Wisconsin. Wisconsin came back with 2 late tries to win 24-22. SoCal had a real strong side but 2 yellows hurt them in the end.

We closed out by retiring to the Frontier bar which has both kinds of music, Country and Western, before heading off to the airport. A great weekend of running rugby. Thanks to the Eastern Rockies Referee Society and Joe Z in particular for the invite and games.

From Tom Zanarini:
The 2013 jerseys are nearly here. Society members who have refereed 5 matches assigned by the NCRRS in the past year (NCYRA matches don’t count as they handle their own assignments ), then you are entitled to 1 (one) referee jersey. This year’s jerseys are 100% polyester, similar design to the USA Rugby Referee kit with one huge exception; ours are reversible! Gold on one side, white on the other. My last attempt to get us two colors in the same year nearly broke the bank, so a little ingenuity from Canterbury will help us look good and save cash.

From Paul Bretz:
Wonder if you could do some advertising for a program that Matt Eason and I have created. We have created a referee coaching development site that is geared toward referee and referee coaching development. The premise is simple: Review videos of referee performance from the perspective of a referee coach. Each week there will be a new video to review, observe and document performance, and comment on the how best to develop the referee. The target audience is referee coaches. In coming weeks we will have more classes soon and we are in the process of developing a best practices class which will provide referees coaches with forms, coaching resources etc.

Report by Giles Wilson:
Not having refereed sevens in a while and having had some time on my hands, why not go up to Dixon to spend a day with youth sevens? I picked the right day, overcast all day, warm but not hot.

I ended up helping with the U10 and U12 games, for which facilitate is probably a better word than referee. Not having had any experience with these games, my first was not quite what I expected – I’ve never worked with “uncontested lineouts” before. There were players who seemed to be 6 or younger – and they competed well, both ball in hand as well as in defense.

It is great to watch the look of joy on these boys and girls faces as they made a break and the determination to make a tackle on a bigger player when on defense. Priceless and if you haven’t volunteered for one of these events, it will remind you why we all started to play this game.

I ended up refereeing players from Santa Clara Youth, Seahawks Youth, Raptors (Concord area), Pleasanton, Danville and Bowling Green (as well as combination teams). All of the teams had a mixture of levels while Bowling Green had players from 6 to 16 who all wanted to play as much as possible and seemed to prefer “playing up” against bigger opponents – many of whom they defeated with room to spare. They displayed selflessness in offense and defense, timing and spacing – hopefully their home life will allow them to develop.

My last game was West Lin Girls on tour from Oregon against Dixon; the former were obviously having a great summer tour while the Dixon girls had skill, size and pace. One player demonstrated an incredible sidestep, at pace which West Lin couldn’t touch – reminiscent of Gerald Davis; a 90 degree change of direction at 90 miles an hour. Dixon scored almost at will but couldn’t keep a clean sheet, final 37 – 7.

Overall a well-organized event, a number of referees, run on four fields plus an undersized field for the U10/12 – youth rugby has come a long way and seems to be going places. Now we just need to keep these players “in the game” into their adult years.

Steve Waldo died on June 16. Steve was a four-time mayor of Brisbane, one of the founding members of the Hastings RFC, and he was one of the fourteen referees that the Rhinos produced. (Not bad for a team known primarily for singing.)

Steve played and refereed in the seventies, one of the golden ages of NorCal rugby.

A friend and former teammate urged us to remember his intelligence and kindness. A friend to all, a father of four, he passed away on Father’s Day, dying peacefully at home, surrounded by his family.

We all get to live, and we all have to die. Leave it to a rugger to show us how to do it best.

Our Most Improved Referee struts his stuff. 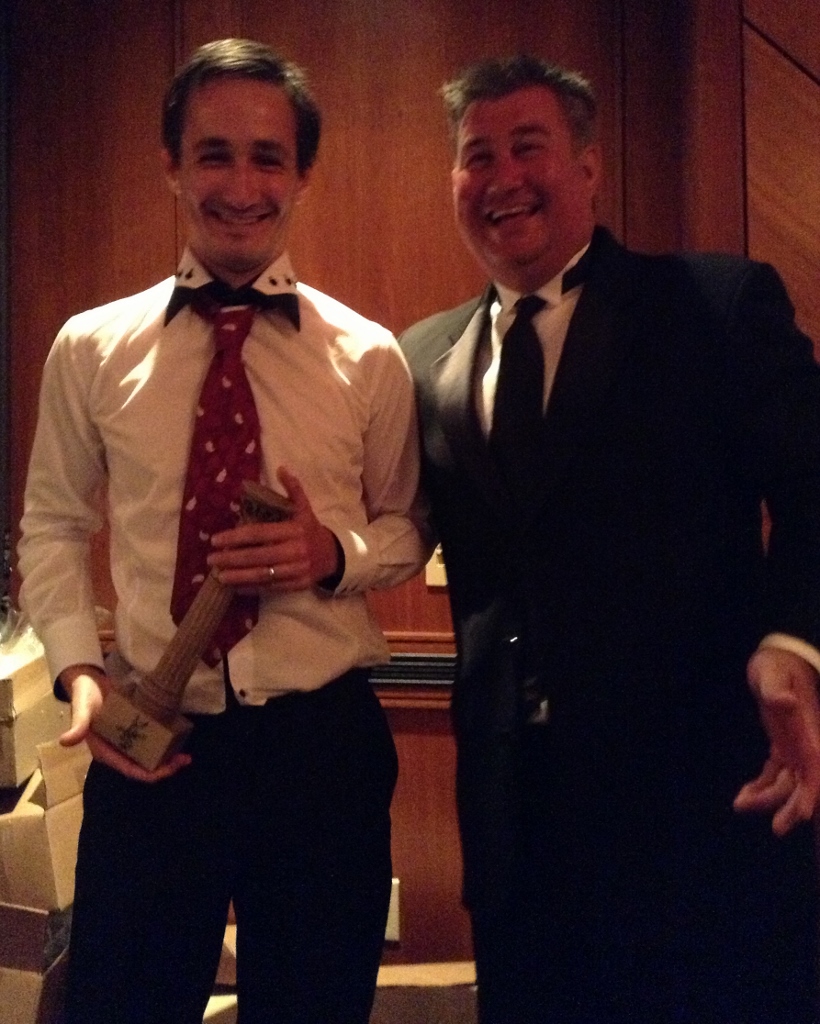