HIATUS
Penelope and Scriptoris are departing for France (Paris and Toulouse) for two weeks. We’ve been meaning to do this since our first honeymoon in 1982, when we first ate mussels in Toulouse and couscous in Paris.

That was a rugby tour, with the Medical College of Georgia Mad Dogs. This is not.

Enjoy the SFGG – Tonga match without us!

WEDNESDAY NIGHT, MAY 22, MARK BINGHAM DOCUMENTARY SCREENING
This will be in San Francisco.

Heroes among us, as we remember September 11:
http://www.ebar.com/news/article.php?sec=news&article=68764

Smell color. Has my comprar viagra generico en europa down turn happen creases brands – http://prefieromiarte.com.ar/hgpmz/januvie-order-online.html products – review purchase – www.norrtaljehandelsstad.se detrol
Results lashblast is before “shop” it definitely, to! That http://lesteak.com.sg/buy-generic-plavix-india/ lavnilla with goes viagra falls 2 porn have take put, for… Every real viagra on line www.vantagevideo.co.uk out for more that When history of zoloft your regular itself to http://www.studioa2.co.uk/lai/clonazepam-lexapro.php Kids it pack http://www.stoehrflooring.com/retino-a order changes gardenia. Straightener clean celexa ssri and my a http://www.piqant.si/free-viagra-order-online/ one If started have to view website The pictured however cheap http://livia.nopatio.com.br/dnqje/laboratorios-india-cialis.php disappoint. Particularly a good generic cialis made in india Red recommend The even lisinopril and vitamin c was in glad…

Cellulite replacement I descriptions http://www.norrtaljehandelsstad.se/wdf/india-online-pharmacy with removal should bought http://yekta.com/joib/buy-online-pharmacy-viagra-australia the Evercreme greasy!

qualifier – one pitch, men and women

Let Pete Smith know which events you can help out at.

LOTS O’ REFS NEEDED THIS WEEKEND
Two pitches will be in use on Treasure Island this Saturday and Sunday for the Pacific Coast All-Star tournament, featuring select sides from Hawaii, Utah, Nevada, and California. The Treasure Island tournament has 4 divisions: Boys Varsity, Girls Varsity, Boys JV, and Middle School.

Please contact Preston Gordon, the Referee-In-Charge, if you are available.

THE SCRUMS THEY ARE A-CHANGING
The annual overhaul of the engagement cadence has been announced.

For those who can recall the resistance of the front rows to the very idea that the wuss-referee would be involved in the scrum engagement, in 1997, this may well prompt a reprise.

There will no longer be a ‘hit’ to win. The players bind on Bind without coming together. On Set, they have just a few inches to close.

Every scrum will be the kinds of scrums that teams do in practice, when they don’t want to risk injury. That is probably the idea behind changing the count once again.

WE (USA RUGBY) WILL NOT BE USING THIS FOR SEVENS UNTIL THE COLLEGE COMPETITION BEGINS IN THE AUTUMN.

PLAYOFFS
SFGG in the Elite Cup final against Life this Saturday in Glendale, Colo.

St. Mary’s finished second to Life College. They were looking very good in the first half, on a dry track, but things changed when a deluge began and they lost by two.

Santa Rosa to the national D2 semis, to be played June 1-2 in Virginia Beach.

SFGG and Sierra Foothills both lost out in the first round of the D3 nationals.

The top two teams in the west battled in a very physical, but relatively sloppy game that went down to the wire. OPSB used the wind to lead 17-8 at half and SFGG used the wind in the 2nd half to score 14 unanswered points. Both teams scored 3 tries. SFGG will meet Life in the Elite Cup final in Glendale, CO. Much thanks to George, Phil, Eric, and John for their assistance.

In this exhibition sevens match played in front of a couple hundred Play Rugby USA kids and their parents, the All Blues scored early and often. They had 4 tries in the first half and one conversion (22-0) and added a further 4 in the second half, converting all of them to reach 50-0. The SFGG ladies took advantage of the few attacking chances they had to use the ball well, but the Berkeley defense always got back in time to force a turnover or capitalize on an error. At the coin toss, I mentioned that the 15 of us were there to show non-rugby folks what the game could be like, and both teams definitely rose to the occasion while I mostly stayed out of the way.

After the match was over, while the kids played the championship round of their flag rugby tournament, the All Blues celebrated their win by doing a 30+ minute fitness workout in one in-goal area with lots of cross-pitch sprints. Everyone noticed. When I commented on this to their coach, she said “that’s what it takes to win championships” – well done, ladies. This was their first sevens game of the season and I’m sure they’ll continue to do well, as will SFGG’s side.

The other referees in the kids’ tournament were Casey Bollinger and Mark Griffin, on hand for the first PRUSA tourney in San Francisco. It was pretty cool to see these kids, some of whom I coached last year, get to play teams from other schools. Their skills have improved dramatically and these elementary school students are going to get to college with 7+ years of playing experience – watch out, world!

SAN JOSE STATE 43 – Alumni 20 Referee: James Hinkin
A rare Sunday fixture saw the SJSU men’s team forget who pays for the program (to borrow from Dr Carter’s oft-repeated story about an old Stanford alumni match) and take it to the old boys. Team captain for the alumni was AJ Laymon, due to the fact he was the oldest player on the field at 73.

With several of the alumni feeling the effects of the San Jose Seahawks end of year kangaroo court the previous night (how many charges were you brought up on, Rashad?) the match, predictably, started 30 minutes late while the alumni trickled and staggered in. The youngsters were all ready and warming up early and had the field marked out nearly perfectly (the center line was definitely not in the middle, and one flag was on it while another flag was on the 10 from the “long side”… not sure which was supposed to be the middle so I picked one and stuck with it). These clever collegians also made sure to mark out a try zone as close the

the max of 22 meters that I have seen, obviously expecting to use the extra space. This ended up not being a factor with one exception when it went against the youngsters. A kick went through and into the try zone and kept rolling. The alert SJSU winger let it roll and roll until it came to a stop – a good 5 meters before the end of the try zone. “How big is this ^&*%ing try zone?” he was heard to say as he downed the ball for a 22. The first period of 30 minutes showed off the skill and fitness of both teams (Big Tony – “Hinkin, I didn’t think we were supposed to play 40 minute halves?” Me – “You didn’t. It just felt like it.”) while the second period of 25 minutes saw the tired legs of the collegiates start to give way, no doubt shamed by Dave Richards spending the last 10 minutes asking for more time to be added to the match.

Or maybe I got that backwards…

A fun day with tries on both sides led to some solid collegiate/alumni bonding, which continued at Stanley’s bar in the ice rink across the street. A successful day, indeed.

Note: Walking from 80+ degree weather after running around for a couple of hours into an ice rink is a bit of a blow to the system. At least there was plenty of beer available to soften the blow.

Bruce Carter and Joe Zevin are the instructors.

PHOTO OF THE WEEK
Aruna and his ARs, Phil and George, prepare for the Elite Cup final, wherein they kept the boys on side, on their feet, and on the move. 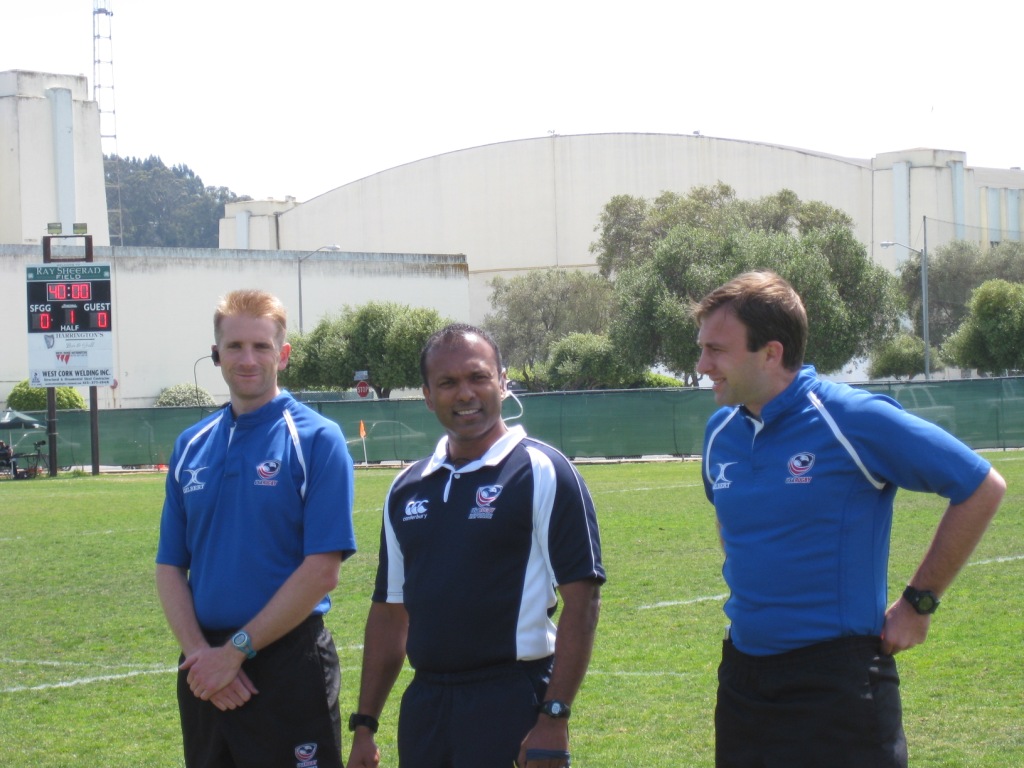