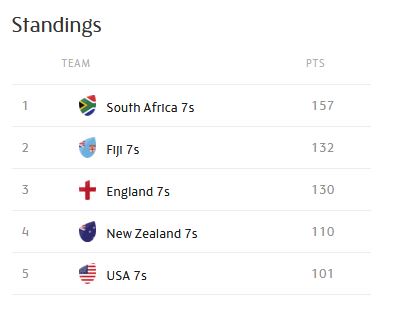 The USA 7s team continues to improve as they made the Cup Final in Singapore and they accomplished this by doing the impossible: they beat Fiji in a game where they made 0 tackles. Yes, zero. None. Saiva. Who does that? Well, apparently we do. We were awesome on the restarts and retained all of them – both ours and theirs. We had possession for what seemed liked 90% of the match. We retained possession until we scored or the few times we turned it over. How do I know we only turned the ball over a couple of times? Because every time we did, Fiji picked up the ball and scored.

That was the pattern of the game. The USA had possession and worked the ball back and forth probing for openings. This either ended in a try for us or a turnover where Fiji would score untouched with occasionally a pass or two. It was amazing to watch. This seriously underscores the importance of the US being the best restart team in the world because had Fiji gained possession on any of the kickoffs then I don’t know if we could have stopped them. They were that good with the ball in hand. Granted, this also underscores the truism that the best time to attack is after a turnover because the defense is out of shape but still, we are a very good defensive team and nobody else has done anything similar to that to us since we reached this elite status that we now enjoy.

Elite status. Our current play has earned us that title and 5th place in the standings, only 9 points behind New Zealand, offers further proof. How elite are we? After losing to Australia in the 3rd place consolation match in Hong Kong we rebounded by spanking the Aussies in the semifinal match. That set up the easiest of finals imaginable. Canada was upsetting teams left and right to get to the finals with wins over New Zealand and South Africa and we OWN Canada. Seriously, they had no chance. Just give us the Cup and thank everyone for coming.

Last week, after yet another win over Argentina, I boldly proclaimed that “there is no doubt who is the top dog in the Americas these days”. The Gods of Hubris apparently noticed and invoked the dreaded Commentator’s Jinx. Canada continued their upsetting ways and scored their first Cup win in a tight, back and forth game. Congratulations to our neighbors to the north. Oh, Canada!

What Is In The Water In Singapore?

The Greatest Rugby Weekend Of The Year

It is almost impossible to overstate how much good rugby we have here in Pelicanland. On Saturday, May 6th, we will host the Varsity Cup at Santa Clara, the D1-A final at St Mary’s, the CR1 club championships at Treasure Island and the High School Championships, featuring the reigning champions and the current #1. Who’s got it better than us?

The Varsity Cup final will be played May 6th in our own backyard at Steven’s Stadium on the campus of Santa Clara University. The high noon showdown will be the winner of Penn St. vs Cal and Navy vs Arkansas State. For tickets and more information please go to www.varsitycup.us.

Eat, Drink And Be Merry

A missive from our Glorious Leader, may he never be short of blow. For his whistle. For blowing his whistle.

Thanks for providing your feedback related to the banquet date. The date to come and celebrate our accomplishments and season is set for Saturday May 13, We will be celebrating at Scott’s Seafood in Walnut Creek.

We need to get a headcount of participants and guests and we ask that you complete the following form by May 1: https://goo.gl/forms/y6axwPj9KNT9heJH3.

The form has a list of entree choices. We will have a no host bar set up and appetizers will be served from 6:15-7:00. Awards will be presented after the dinner. The society will be picking up the tab for referees. We ask that you pay for your guests prior to the event by using the PayPal link provided in the form. The link will also be available for access when you hit the “submit” button.

We look forward to seeing you all, dressed to impress, on Saturday May 13.

It is playoff time again and many of us will be called on to adjudicate these matches. Please note that quite often matches will be listed by seeds, so the game will be something like Pacific #3 vs South #1 or Winner Match 3 vs Winner Match 1. When writing your report narrative please make sure you explicitly identify which team is which so that I can update the team names in our reporting section below. Many thanks to those who did playoff matches already who have made my life easier.

Copy the link and have it available on your smartphone. If you have an iPhone add the link to your home screen.

When needed fill it out and click submit. The discipline chair of the competition you refereed will receive a notification about the incident. He/she may contact you latter for more details.

Overcast day, on a soft, tilted pitch. Washington’s D2 side was playing Washington Irish’s D3 side in a post-season friendly. With Washington just finishing a campaign where they finished last with only 1 win, and their players showing up late, it didn’t look promising as the Irish had numbers and were in the middle of a structured warm-up. First appearances can be wrong.

The Irish seemed better organized and their 10-5 lead at the half didn’t represent their overall advantage at that point. The first half ran about 48 minutes with Washington giving away penalties on their half of the field late in the half. The Irish kicker turned down a chance for posts with the mark centered and at the 22. He looked winded so the Irish ran some crash balls. They got close, but were held up in goal and the half ended. The 2nd half started close but in the last 20 minutes Irish had more and more gaps in their defense and Washington’s superior athleticism took hold. With Irish players falling off the tackles, Washington scored a series of long range tries and by the end were capable of scoring from anywhere on the pitch.

A perfect evening for a mid-week match. Archbishop Spalding’s one home match of the year (I anticipate an awkward post-season review for the Match Secretary) also served as Senior Night for the team.

Perfect temperature with no noticeable wind for a match played on a new artificial pitch.

A tight, back and forth affair between 2 rivals. The two sides were well-drilled, but only in a limited range of tactics, meant for predictable play punctuated by burst of either athletic talent or miscues. MSJ picked up the sole try in the first half, but the game was still very much in the balance.

Unfortunately, high tackles became a problem, with both squads having players carded for repeated dangerous tackles. MSJ wasn’t able to take advantage of the man, but Archbishop Spalding, which had tied the match when a MSJ player was sent off for high tackle Archbishop Spalding collected 2 converted tries to seal the match.

A lovely day at Maritime Academy’s wonderful rugby field. Almost a point a minute scored in the first half but most of that was due to indiscipline from the players and subsequently, yellow cards meaning more gaps on the field. Each team scored tries when the other team had players in the bin, but they still continued to offend throughout the game.

The indiscipline was disappointing given the display of talent and athleticism on show. Both team’s abilities are a credit to the hard work and dedication they invest, and the quality of rugby was a product of that.

Great D3 semifinal game. Both teams came to play and were interested in rugby without the extracurriculars. Jim Crenshaw and I carpooled from Sacramento which made for a nicer drive to Chico. The game went well with Chico down 12-24 in the second half. A penalty try made it 19-24. On the next kickoff, Chico returned the kick for a breakaway try down the right sideline pulling ahead 26-24. Google tried to come back and make something but a late knock on killed any momentum. Chico held on to win.

Sacramento recovered from a 17 point deficit in the first half to beat the Fresno visiting side 39-27. Fresno came out in the first half and was on fire. The former San Fransico Rush flyhalf did a great job of putting his backs on the front foot. Unfortunately Fresno struggled to control the scrums. With 3 minutes left in the head the capitals finally got on the board with a penalty kick.
3 minutes into the second half the Fresno hooker was sin-binned for punching an opposing player and Sacramento took the opportunity and scored 22 tries. The second half, like the first half was controlled by one team. Sacramento tied the game with 20 minutes to go and then scored 3 more tries to seal the match. Fresno did score the final play of the match to bring the score closer.

Sacramento will play the the Blackhawks for the division 2 title match next week.

(EDITOR’S NOTE: With Sacramento scoring 22 tries in the first half I would expect the score to be higher.)

A fantastic day for 7’s out at Stanford. Two teams, Chico and Davis, canceled at the 11th hour, and it left the bracket system in shambles. However, with some great juggling by the tournament coordinators, the tournament ran smoothly, and there was some very exciting competition.

The second match was UNR against SJSU. This was a slightly closer contested match, but with the help of #4 on UNR (a very big and powerful runner who was able to break through multiple tackles in a single run), they were able to win without much consequence.

My final match of the day was the bowl final between SFSU and UCSC. Both teams had struggled to have any offense throughout the day, and this game was low scoring as a result. However, SFSU was able to prevail with better discipline and a couple of line breaks that led to long runs and scores.

It was clear than Stanford and UNR were the best teams at the tournament. They had superior tactics and athletes that led to easy wins for them over their opponents. The Cup final between the two teams was incredibly exciting and was won in the last seconds by Stanford after a closely contested first half.

The HSBC World Series Standings are looking mighty fine this week as the US is poised to pass New Zealand in the next round. 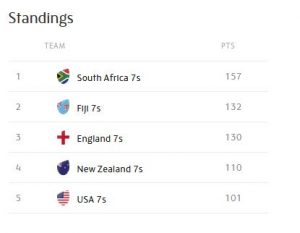